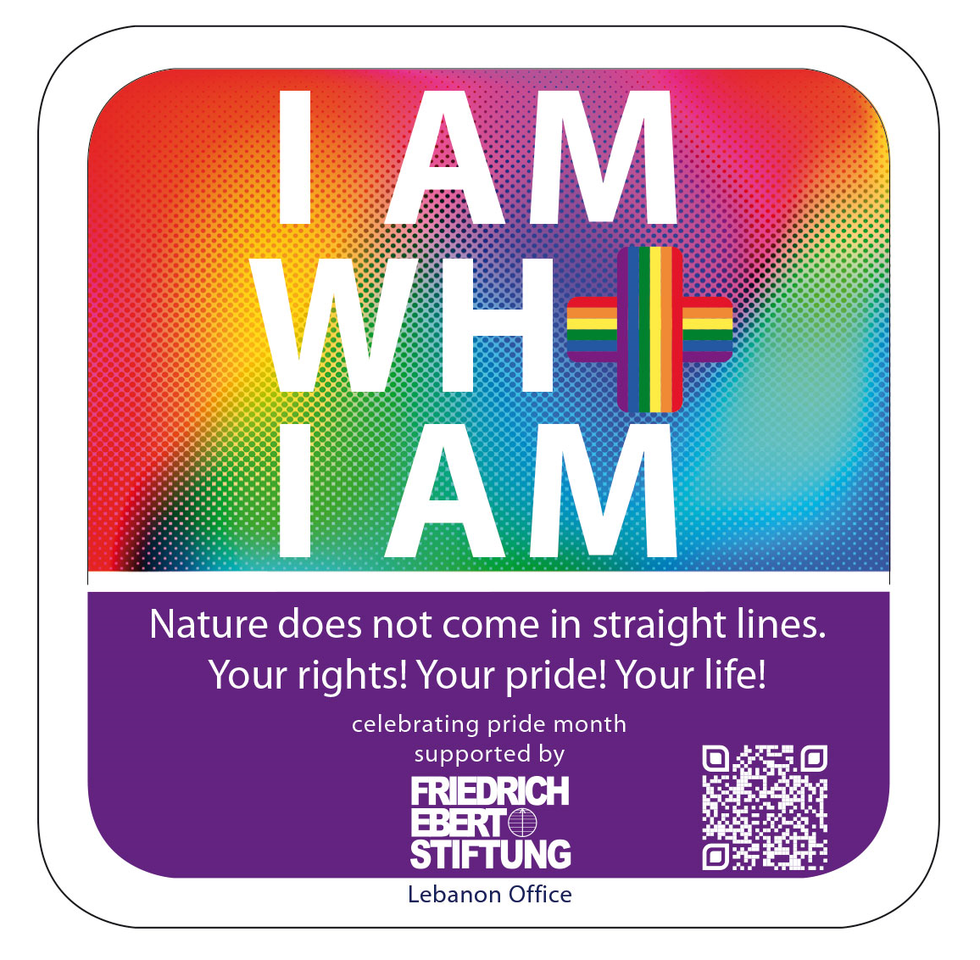 On the occasion of pride month, let us accept and respect each other, and appreciate what each and every one of us has to offer.

Pride Month is an entire month dedicated to the uplifting of the LGBTQI+ voices and support of LGBTQI+ community rights. It is an opportunity for people around the globe to celebrate the visibility and hard-earned victories of members of the community and movements since the Stonewall uprising in 1969 which began in the early hours of June 28, 1969 when New York City police raided the Stonewall Inn, a gay club located in Greenwich Village in New York City.

Years after the Stonewall uprising, the LGBTQI+ community in Lebanon celebrated pride month by publicly raising rainbow flags at several locations for the first time ever in June 2017. Although this was a milestone when it comes to visibility and awareness, members of the community are still facing violations of their basic human rights and full equality is yet to be achieved.

In recent years, the government has banned several events tackling gender identities, gender justice as well as other events where members of the LGBTQI+ community shed light on their grievances as well as their success, under the pretext of “preserving public morality”(1).  Moreover, members of the community are still prone to be arrested by the security forces, as the Lebanese penal code continues to be used to criminalize queer sexual behaviors as “acts against nature”. Hence leaving the fate of the community open to the individual assessments of figures of the judiciary system, some of whom have recently set precedents while processing matters related to queer gender and sexual identities.

Most recently, the uprising of October 17 offered the LGBTQI+ community a platform to push their demands and fight for equality as part of a bigger struggle for justice in the country, thus putting the government on notice that socioeconomic and legal reforms need to include encompass the rights and interests of marginalized groups.

The demand for equality is based on Article 2 of the Universal Declaration of Human Rights of 1948 on Freedom from Discrimination which states that everyone is entitled to all the freedoms listed in it, “without distinction of any kind such as race, colour, sex, language, religion, political or other opinion, national or social origin, property, birth or other status.” The UN itself is promoting respect for rights of LGBTQI+ people of all ages and in all regions of the world.

It is not necessary to create a new set of LGBTQI+-specific rights, or set new international human rights standards. All that is required to protect LGBTQI+ people from violence and discrimination is respect for existing rights.

Currently, there are 71 countries and territories, mainly in Africa, the Middle East and parts of south Asia, where consensual same-sex relationships are still criminalized, including eight where homosexuality could result in the death penalty.

In Lebanon, despite the active roles that members of the LGBTQI+ community are playing in all parts of society and economic activities, a large majority is or has been facing challenges and discrimination on numerous occasions throughout their lives. The following glossary is designed to explain some of the terms related to gender and sexual identities and help to overcome wrong perceptions and falsely spread stereotypes.

LESBIAN: The term usually refers to a woman who has a romantic and/or sexual orientation toward women. Some nonbinary people also identify with this term.

BISEXUAL or BI: A person who experiences sexual, romantic, physical, and/or spiritual attraction to more than one gender, not necessarily at the same time, in the same way, or to the same degree.

TRANSGENDER: A person whose sense of personal identity or gender does not correspond to the sex they were assigned at birth, or does not conform to gender stereotypes. Sexual orientation varies and is not dependent on gender identity.

QUEER: a multi-faceted word that is used in different ways and means different things to different people. 1) Attraction to people of many genders. 2) Don’t conform to cultural norms around gender and/or sexuality. 3) A general term referring to all non-heterosexual people. Some within the community, however, may feel the word has been hatefully used against them for too long and are reluctant to embrace it.

QUESTIONING: An individual who is unsure of and/or exploring their gender identity and/or sexual orientation.

INTERSEX: An umbrella term that describes people born with any of 30 different variations in sex characteristics including chromosomes, gonads, sex hormones, or genitals.

AROMANTIC: A person who experiences little or no romantic attraction to others and/or has a lack of interest in romantic relationships/behavior.

ASEXUAL: A person who experiences little or no sexual attraction to others and/or a lack of interest in sexual relationships/behavior. They may or may not experience emotional, physical, or romantic attraction. Asexuality differs from celibacy in that it is a sexual orientation, not a choice. People who are asexual may call themselves ace (2).

PANSEXUAL: A person who experiences sexual, romantic, physical, and/or spiritual attraction for members of all gender identities/expressions.

NON-BINARY or ENBY: A person whose gender identity does not fall within the binary genders of man or woman.

GENDERFLUID: A person who does not identify with the gender binary and move within genders and gender stereotypes.

AGENDER: a person with no (or very little) connection to gender, no personal alignment with the concepts of either man or woman, and/or someone who sees themselves as existing without gender

STUD: A term originating within communities of color to describe a masculine identifying person who was assigned female at birth. Here is a study looking at the sexuality and gender construction of people who use ‘stud’ to describe their identity.

MĀHŪ:(‘in the middle’) in Kanaka Maoli (Hawaiian) and Maohi (Tahitian) cultures are third gender persons with traditional spiritual and social roles within the culture. Here are two videos to help you learn more about the Māhū culture.

MUXE: Derived from the Spanish word for woman (mujer), muxes generally represent Mexican people who are assigned male at birth and identify as different genders. The iterations among the muxe community and their self-identifications vary – some identify as male but are female-expressing, while others identify as female and are more closely associated with Western culture’s understanding of transgender. Others defy gender entirely. But, in Mexican culture, the term “third gender” is often tacked to the muxe community. This video and article can help you learn more about muxe culture and identity.

HETEROSEXISM: Prejudice against individuals and groups who display non-heterosexual behaviors or identities, combined with the majority power to impose such prejudice. Usually used to the advantage of the group in power. Any attitude, action, or practice backed by an institutional power that subordinates people because of their sexual orientation.

CISGENDER: A person whose sense of personal identity or gender does correspond to the sex they were assigned at birth.

LGBTQ2S+ ALLY: Someone who confronts heterosexism, anti- LGBTQ2S+ biases, heterosexual and cisgender privilege in themselves and others; believes that heterosexism, homophobia, biphobia, and transphobia are social justice issues.

For further information, you may visit: